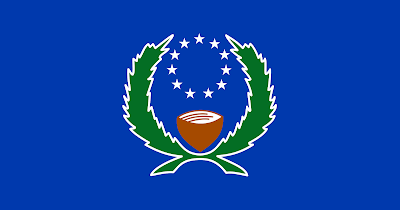 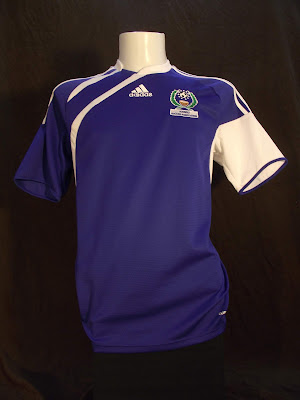 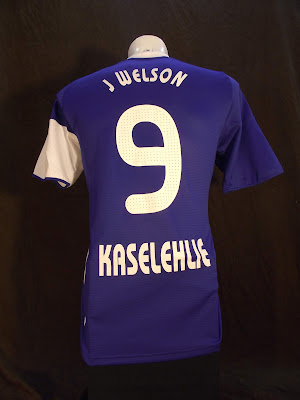 This is a very special piece of polyester to me, but collection-wise, also a very questionable one. Let's start with "who the hell is Pohnpei" and why it is special to me:
Pohnpei is one of the States of the Federated States of Micronesia, so a small little atoll in the Pacific inhabited by less than 40.000 people. It also was largely known as the worst national team in the world across global media. The source of that infamous label is probably the old Elo ranking that floated around in the internet and ranked all national teams, FIFA and non-FIFA.
So why is it special? Well, triggered by the title of the worst team around, Paul Watson from England thought this is probably the only place he could earn a cap as a national team player. To cut the story short, he did not, but he became their national team coach, lived on the island for half a year or so, trained on toad infested pitches in constant rain and ultimately brought the team to Guam and got the first ever national team victory to Pohnpei. That incredibly story is all written down in the bestseller "Up Pohnpei", arguably one of the best football or adventure books I have ever read.
(to be fair, I am biased. Since 2017, I am working together with Paul in CONIFA and especially after the rollercoaster of the World Football Cup 2018, I consider him as one of my best friends. Nevertheless: READ THE BOOK!).

Now we come to the part why this shirt is dodgy.First of all, it seems impossible to get it and even Paul Watson doesn't have one. They did indeed wear this design for ages, but on all pictures I find, from trainings and matches, they have only numbers, but no names on the back. They might have changed that for the Guam tour, arguably the greatest event the team had, but at that Guam tour the shirts were sponsored by "Coyne Airline", so this one cannot be from that batch. Finally, I bought this shirt on German ebay from a dude who is claiming that he was there on vacation. That seemed kind of reasonable to me at first sight, as no one else would just trade Pohnpei shirts on only the German market. However, the same bloke later offered a Tonga shirt, which I could proof was definitely fake, and he claimed was from a trip to Tonga. Thus, I have my doubts about this one. Either it was self-made from a template or it is indeed a matchworn kit from Pohnpei - who knows!

UPDATE: I have just double checked with Paul, who told me:
"I can help! We had a batch of plain Adidas shirts for training and I got names put on the back to make them feel special. Then when Coyne sponsored us we had to get new ones for the Guam tour. So this shirt would be worn against Island All Stars and such"
Even better, I could find a video of that match vs. the Islands, in which you can see the former owner of this shirt (J.Welson) scoring: