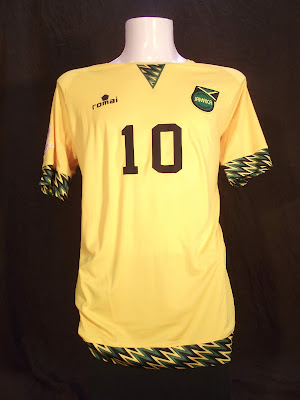 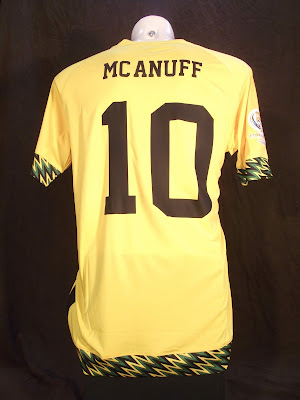 The Reggae Stars are one of those teams everyone seems to love. I remember half my class in school getting behind them when they played their first (and only) World Cup 1998 in France just because those players come from the same speck of floating land as Bob Marley. Fair enough, the team always had mindblowing shirts, plays a very positive and attacking style football and celebrates like no other when they score or win - so indeed there are many reasons to fall in love with them. This shirt, clearly, is just another proof of their awesomeness and, even better, it was matchworn in a continental tournament, the Gold Cup 2015 in the USA, where Jamaica beat the USA to make it to the final (which they lost to Mexico).

The player who initially wore this shirt for his country is one with a fascinating story. Jobi McAnuff was born in London to a Jamaican dad and started his career at Wimbledon FC, a club that is no more, in 2000. Only two years later, the Jamaican coach at the time, Carl Brown, selected him for his team to play Nigeria in a friendly tournament called "Unity Cup" at Loftus Road. I did not see that match, but he probably did not impress to much, given the fact he was then entirely ignored for any Jamaica squad in the following 11 years! In 2013 he was picked to play a friendly vs. Mexico. In 2014 he then lifted the Caribbean Cup on home soil with Jamaica. In 2015 he played the Gold Cup, where this shirt is from, and made it to the final, and in 2016 he played all matches of his team at the 2016 Copa America. His international career thus really started at the age of 32 and he still made it to three major tournaments!

I got this shirt from a fellow German collector, for a moderate price of around 60€. I also do have the opposite shirt to this one, also matchworn, which I still have to photograph and will then upload soon.