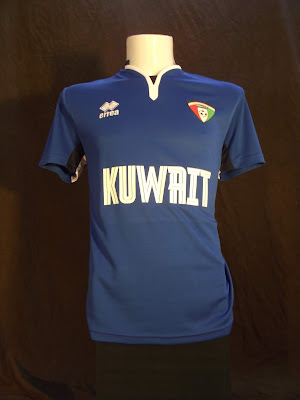 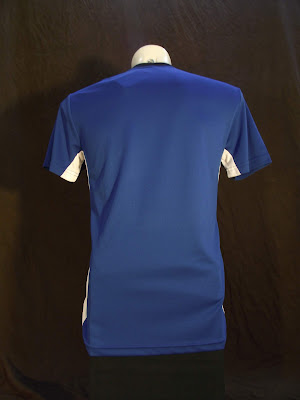 After blogging so many doubles, triples or matchworn additions, it is a massive pleasure to be finally able to blog an entirely nation to make it to my collection! Kuwait was an absolute nightmare to get for absolute ages! The shirts were never really for sale anywhere, until a page called taw9eel started to knock them off locally for an absurd price of less than 5€. Nearly a year, I tried to find someone in Kuwait to buy that shirt, as they only shipped locally, and ship it on to me. I eventually found a very nice expat lady from the UK, who did get it for me, brought it back for christmas and then shipped it from the UK to me. Sadly, it was about the worst fake I ever held in my hands.

Now, errea took over to equip and Kuwait recently and, as all previous manufacturers, they decided to not merchandise the shirts at all. However, my mate Nick of Football Shirt World, somehow was able to get them straight from them for his shop and became the only global source for this one. Of course, I had to get this and finally cross Kuwait from my to-do-list. In Asia, this means that I only have North Korea to go, a shirt that became close to impossible to get!