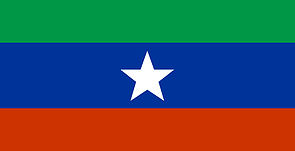 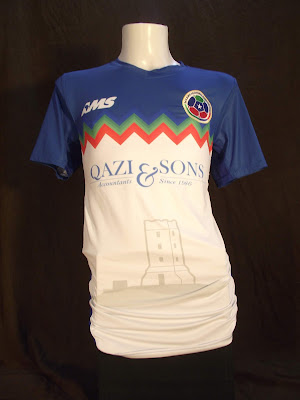 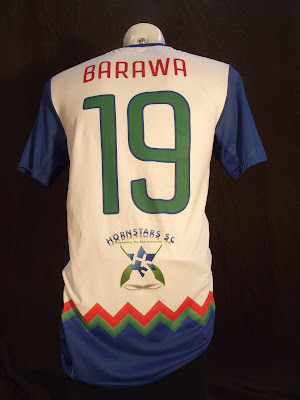 This is not only an absolute beast of football shirt, but also a piece of history, a rather tragic one, I might add. It is a matchworn football shirt of Mohamed Bettamer, a prolific midfielder of Barnet FC and the Barawa international team, which was worn during the CONIFA World Football Cup 2018 in London, which I helped organizing.

Barawa is a port town in Southern Somalia, a region heavily threatened by Al-Shabab and suffering from one the worst instabilities in the world. The city and the nearby region is inhabited by the Bravanese People, who are a local ethnic minority speaking a lanuage that is closer to Swahili than to Somalian. It is fair to say that minorities in failed states, obviously, go through the worst hardships you could possibly think of. That resulted in a large refugee population, which now lives across the world. A major portion of that diaspora is today based in the UK and it was thus a member of this UK based diaspora who set up a represenative football team for the Bravanese People, joined CONIFA and ultimately hosted the World Football Cup 2018 in London! The FA behind the team is a small group of passionate football lovers, who use all their UK based actions to raise funds to support the Bravanese Population back in Southern Somalia - they helped building stadiums, a local grassroots league and transport drinking water and food to the region.

The event that was meant to be the biggest ever for Barawa FA, the World Football Cup 2018 in London, however, turned into a dramatic one for them. Even before the tournament, someone probably supporting one of their group stage opponents, called all clubs the Bravanese played for to "warn" those clubs that the CONIFA event is not FIFA-sanctioned and that there might be negative implications to the club, should they allow their players to be released. Most non-league clubs were not interested at all, but two players that are in the squad of a EPL club were not released anymore. That happened just a few hours before Barawa was about to kick off their opening match, in which they now missed two of their strongest players. Nevertheless, they won the opener against Tamil Eelam.

The following day, Barawa did enquire, if they could at least add one more player to the squad, which was now the smallest of all teams in the tournament. Given the exceptional circumstances, we, as CONIFA, agreed to that. That player was Mohammed Bettamer!
They lost their second group match vs Cascadia, but won their last group match against Ellan Vannin, representing the Isle of Man, which qualified them for the Quarter Final.
However, suddenly the Manx side did protest, due to the inclusion of Mohammed Bettamer, as they were not aware this was sanctioned by CONIFA initially. The protest was unsuccessful, as the participating teams voted against it, and the tournament thus went on with Barawa in the Quarter Finals. Ellan Vannin did leave the tournament in protest and not play any further matches.

What followed for Barawa was quite horrible. Some of the Manx players, being frustrated, and two media outlets did start branding Barawa FA and Mohamed Bettamer as "cheats", playing foul and often even as corrupt. Bettamer, who received endless threats of angry Manxmen (who are not neccessarily connected to the team) saw his career under threat and did not play the Quarter Finals against Northern Cyprus. Sadly, a few other players followed and the team had to start the match with only 10 players. Given that drama, the shirt of Bettamer was not used anymore and was thus the one the FA chose to hand me over as a gift. Although not a feel-good story, I am very happy to hold this piece of history. I also always did, and will, publicly defend Bettamer and Barawa from the abuse they got, especially by a few outlets that are somewhere on the border between fake news and just incompetent and certainly non-journalistic, as I feel the player, but also Barawa, have done nothing wrong by requesting to play and getting that sanctioned.