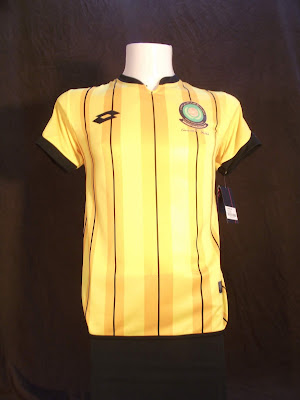 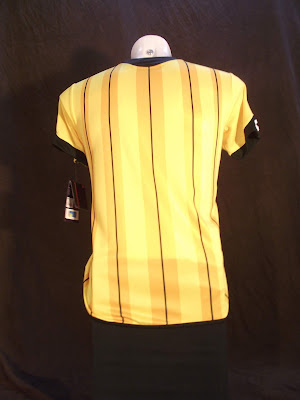 This is my second Brunei shirt, and like my first one, it is toned in gold, the only colour Hassan al Bolkiah, the Sultan of Brunei, considers worthy of wrapping Bruneians. This Sultan was a man that fascinated me a lot when I was young and he was still the richest bloke on planet earth. He probably spend a bit too much and building the largest private yachts in history and flying in Michael Jackson to sing on his son's birthday, so he lost that title. I, on the other hand, today have less fascination for emperors living on the ressources of their own people and land.

Back to the shirt, it is a beautiful design that indeed screams "we are golden" very much. It looks very royal and worthy and probably should do exactly that. Unfortunately, that royalty does not quite reflect the performance of the team wearing this garment, as they are clearly one of the worst within Asia. The picture above is from an article on an upcoming qualifier match for the AFC President Cup, which consisted of a home and away (on neutral soil, actually) match vs. Timor Leste. While Timor Leste isn't exactly a contender for the next World Cup, they still hammered Brunei 4:1 in one of the legs and thus came through.
Fingers crossed that Brunei steps up and sooner or later will play as good as they look!