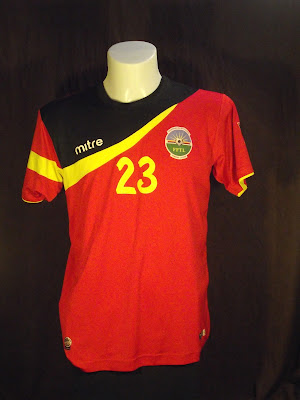 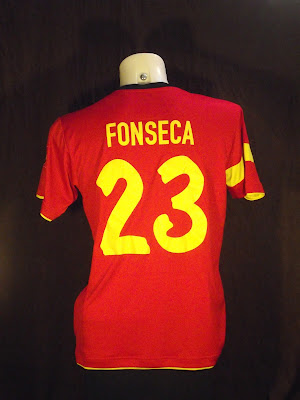 Here it is, one of the favorite shirts of my whole collection. Like all the grands in my collection it came directly from the player, namely José Carlos da Fonseca.
I tried to contact José when I found out that he played professional in Thailand as I thought that he must speak English then. And indeed, he speaks fluent English, actually better than I do.
I had hours and hours of chat with José and really found a new friend in one the small little paradise called Timor-Leste on the other side of the world with him! As sending money to Timor-Leste costs hefty fees we agreed to do a swap. I got a Germany shirt for him with the print of his favorite player, Mats Hummels, and received this amazing flag-style shirt of him.
It is the shirt he wore far abroad in the United Arab Emirates, where Timor-Leste only lost 0:1 against one of the favorites in their group.
Funny enough both shirts did not wear World Cup qualifiers, even though it was the second official group match for the 2018 World Cup. Probably the delivery to the UAE was a bit delayed or something like that.

I again thank José for this absolutely amazing shirt and hope that he will receive loads of great new shirts for his own collection in the future!
Eingestellt von DJLiesel um 13:54