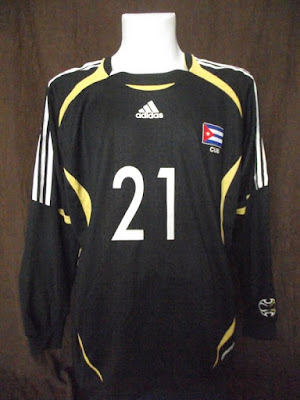 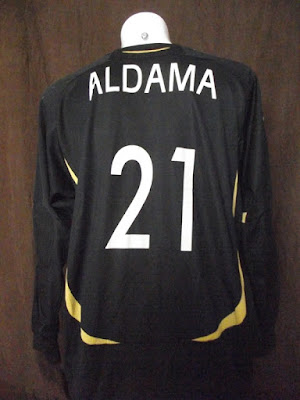 This is the most fucking amazing ugly keeper shirt I ever possessed!
We all see the shirt is plain and ugly as hell. It does not even have a FA logo, but just that Cuban flag. But I couldn't care less! Because this polyester ugliness completes my CONCACAF collection after only 7 years trying and it does so in style! The shirt is matchworn and was probably used by the Cuban national team during their Germany training camp in 2007. The then German coach Fanz brought the team to my home country to play some top clubs like SV Wehen Wiesbaden and Wacker Burghausen and, of course, my favorite club FC St. Pauli, who have been to Cuba for a training camp before.
My shirt was used by the now world famous Cubanese keeper Julio Aldama, who was only tested 1 or 2 times (depending on the source), but was picked as the third keeper for the 2007 Gold Cup in the USA - wearing number 21 again. He played for FC Matanzas, one of the worse clubs of the Cubanese league and defunct by now.
Enough facts now. I would love to again thank the Fortuna Düsseldorf scout who sold me this so very critical shirt for a very reasonable price - probably he only saw the ugliness and had no idea what it means to me ;)
CONCACAF: DONE!
Eingestellt von DJLiesel um 11:18