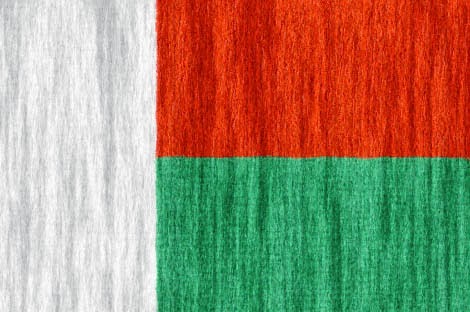 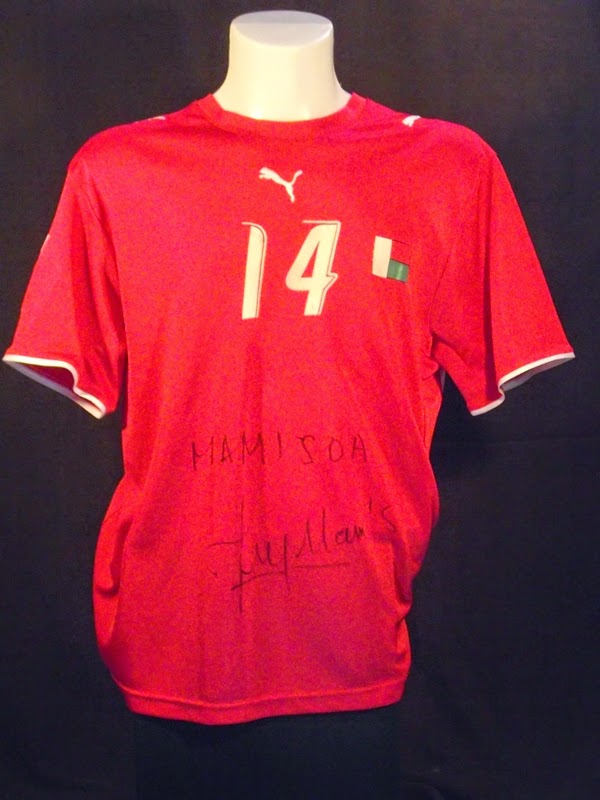 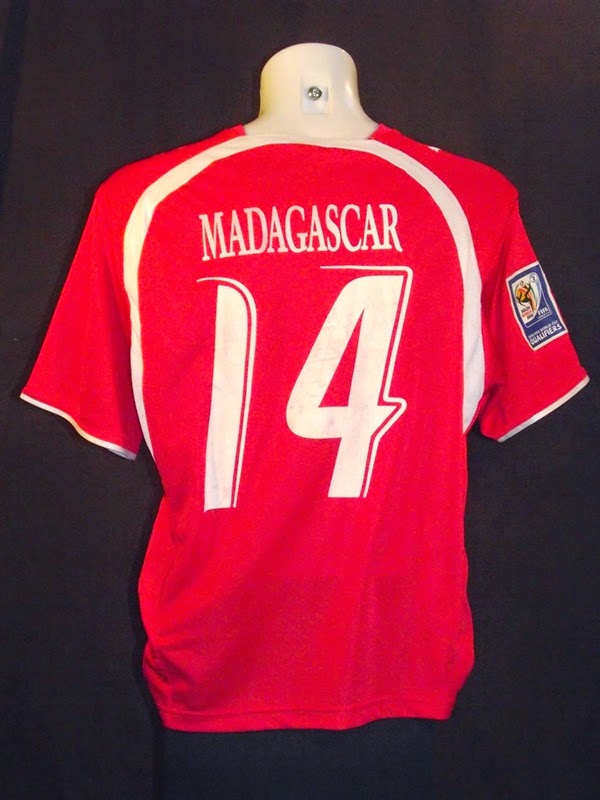 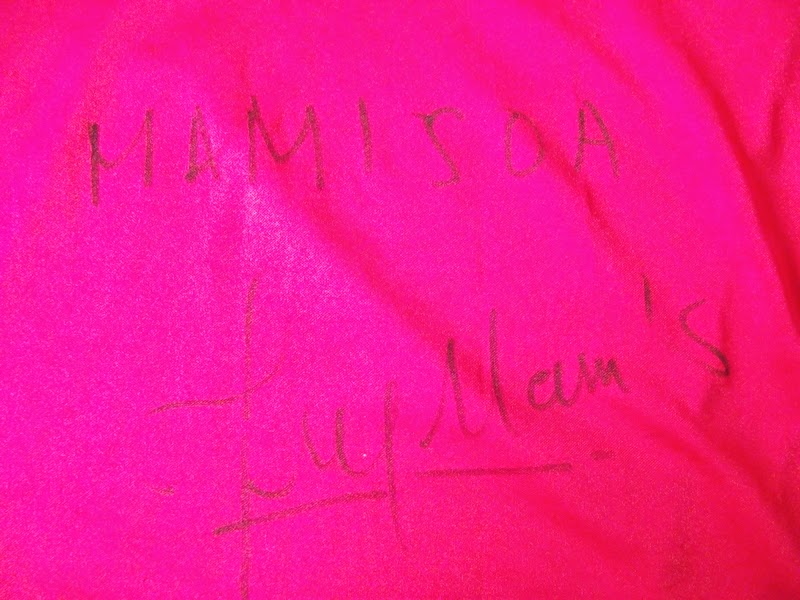 Ladies and Gentlemen, let me introduce the most amazing shirt of my collection so far !
I got this great shirt from a Madagascan player as a birthday present.
There are some facts that make this shirt really unique and amazing:

1. It is a matchworn shirt of the WC Qualifier match against Botswana. This was the only match where Madagascar ever wore this red Puma shirt as far as I know. As you can see on the picture there is a WC Qualifier 2010 badge on the shirt. In the last picture you can see the team wearing it.

3. The shirt is not only matchworn but signed ! It is signed from the guy who sent it to me: Mamisoa Razafindrakoto (do not annoy him now, he does not have any more shirts!). He was not only the captain of the Madagascan national team, but he is somehow a world famous legend ! He took part (of course as the captain) in a pretty historic match ! His team lost 0-149 in the Madagascan championship final ! All 149 goals where own goals by his team and he scored some of them, too. As an act of protest they decided to boycott the game on this way. After the match Mamisoa got banned for the rest of the season of course. Anyways the match is still recorded by the Guiness book as the highest win and most own goals of all times !
More details about the story are on Wikipedia: Article

I think there is just a single word I should say to Mamisoa now: THANKS !
This was probably the best birthday present I ever got of a guy I do not even know personally ! You are really fantastic !
Eingestellt von DJLiesel um 05:36 Keine Kommentare: 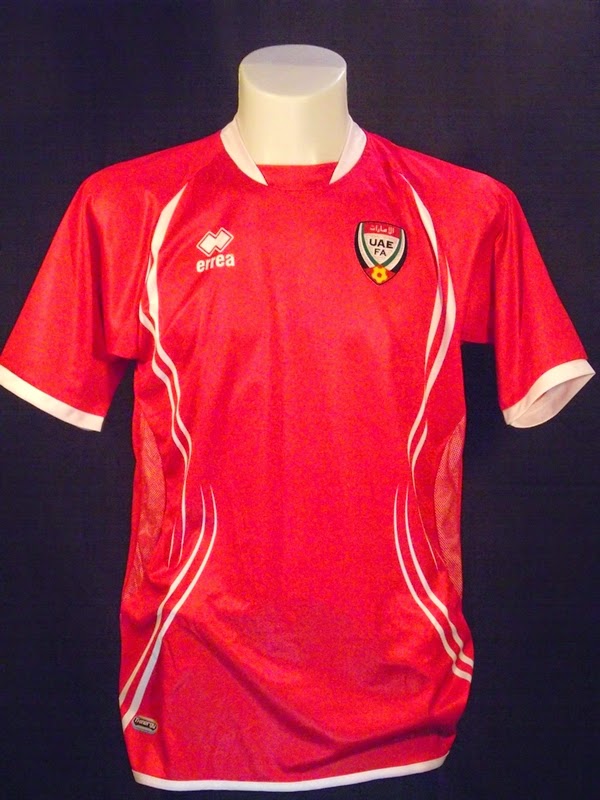 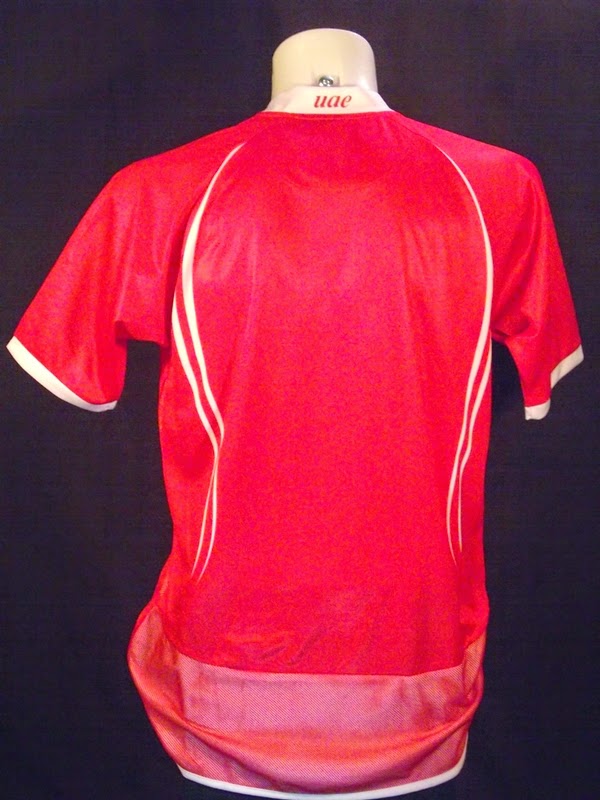 Thanks again Mads ;) Story is told quickly here. Again Mads bought it for me at the UK Online shop. I love this design a lot. It is kind of unique as far as I know. 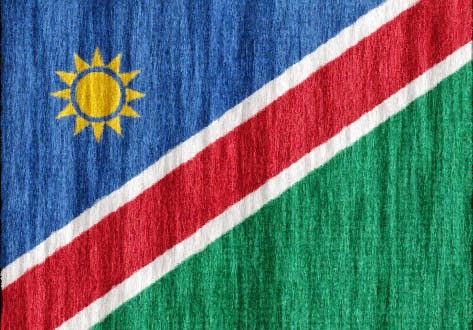 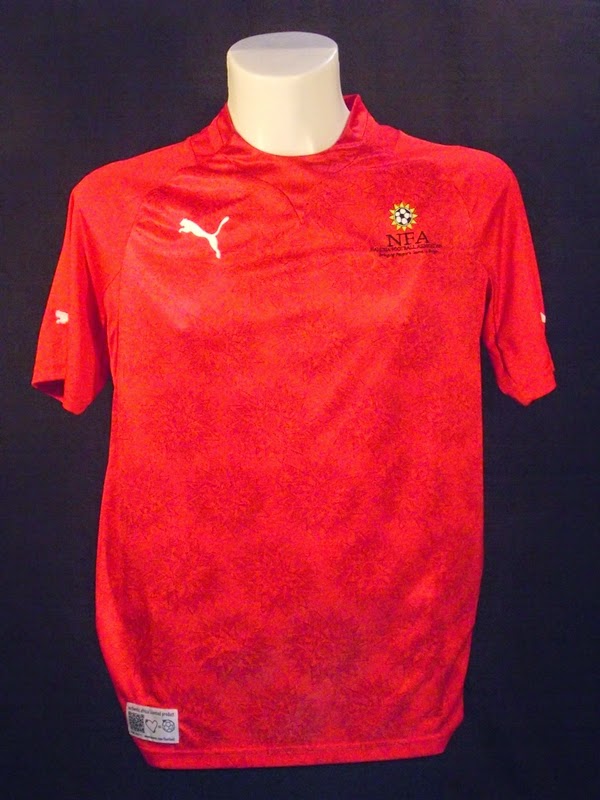 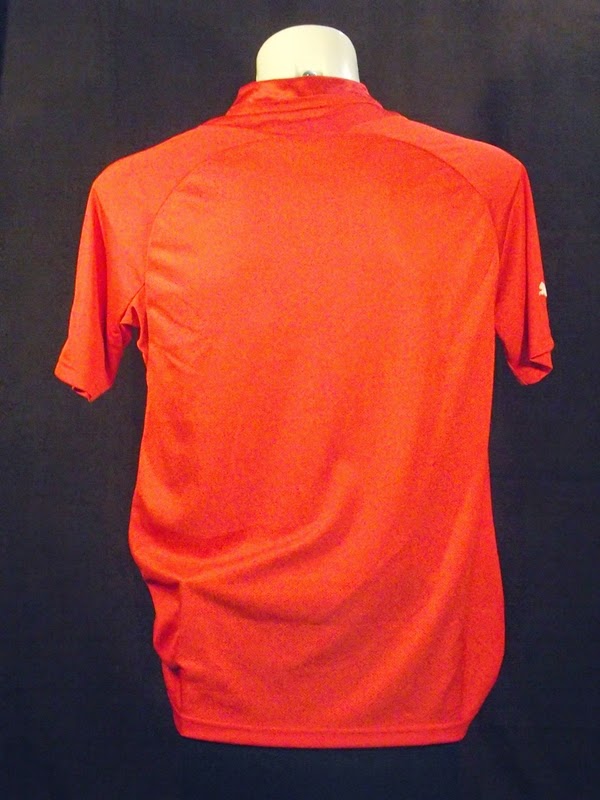 Thanks a lot to my friend Mads for sorting out this one. He bought this shirt in an UK Online Shop and sold it to me later (for the same price) which is really nice of him :)
As I had some money left I could buy this beauty from Mads finally a week ago.
I really love this sunny design a lot :)
Again thanks a lot to Mads for giving me credit all the time !
Eingestellt von DJLiesel um 09:24 Keine Kommentare: 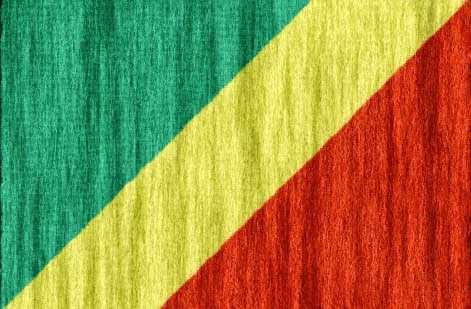 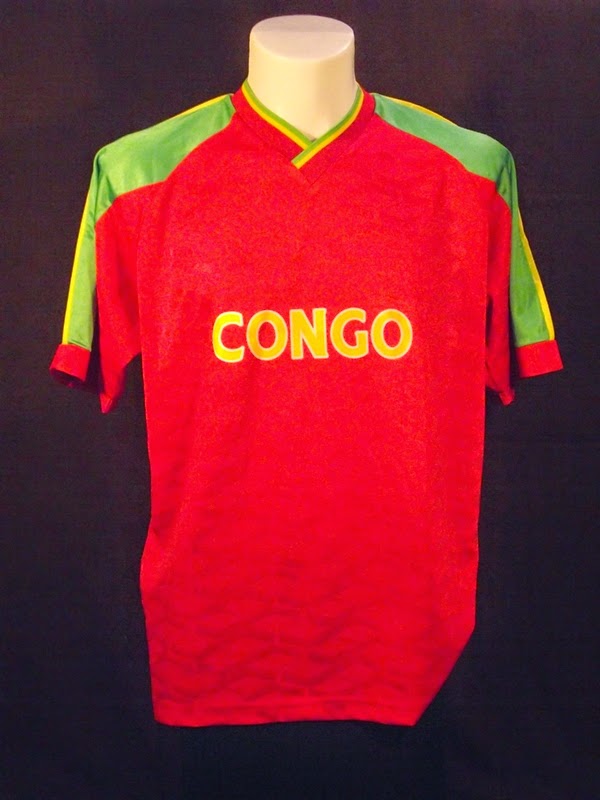 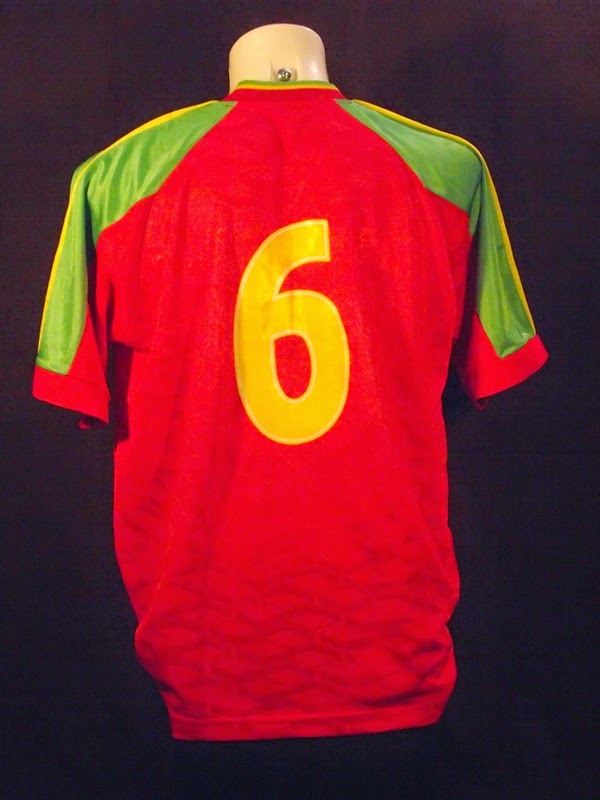 Well, this shirt is really obscure. I got a parcel without a sender on it yesterday. It came from Paris and that is all I know. I have no idea who sent this shirt to me, and I have no idea if this shirt has ever been worn by a Congolaise team. I could not manage to find a picture of this shirt somewhere. The old Puma badge seems legit, so I would say it is an official Puma product at least.
Besides this the shirt came dirty and with a number (and there is something written on the Puma badge ("jeune, #6"), so it seems to be in use somehow.
On the other hand there is not even a logo of the Republic of Congo on the shirt. If anybody has any idea what this shirt is exactly, please give me a comment !
Eingestellt von DJLiesel um 09:17 1 Kommentar: 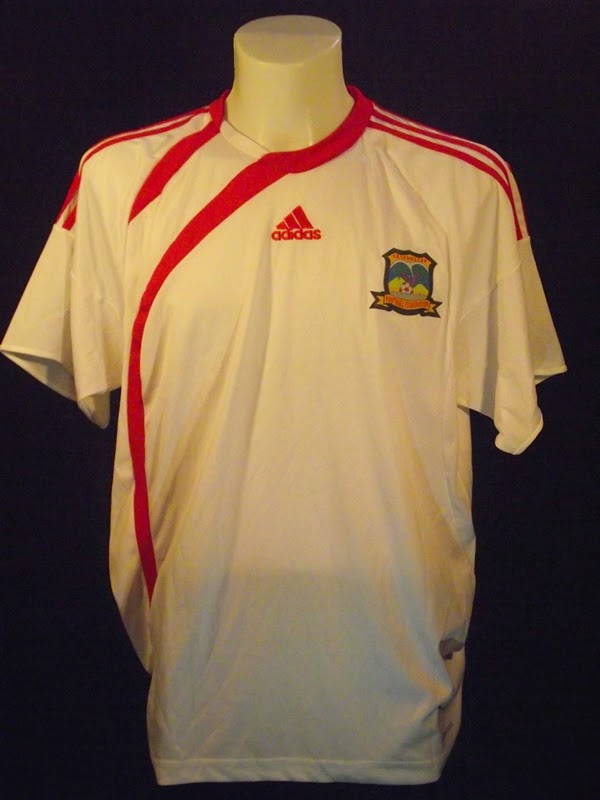 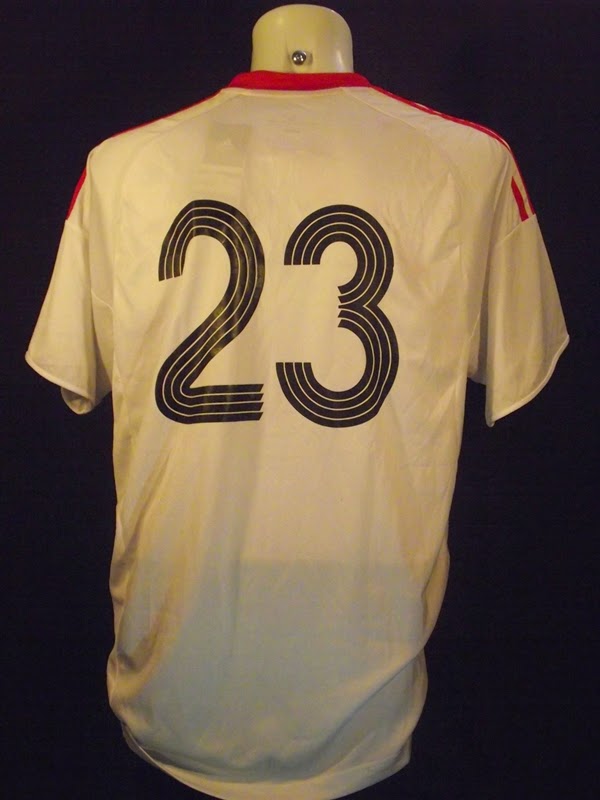 Ladies and Gentlemen, let me introduce another rarity ! ;)
This wonderful Seychelles shirt is probably from 2006, as they used it in their match agains Tanzania as you can see on the above picture. Especially the badge of the FA is really lovely. I also love a lot that there is number 23 printed on the back.
I got this really hard to get shirt from my friend Kidd Lavigne. Kidd is a Seychellois who lives near Stuttgart and has a travel agency specialized on the Indian Ocean. So if you are interested in visiting this wonderful piece of earth watch his homepage: http://www.lavigne-reisen.de/
I had the chance to visit the near island of "La Reunion" twice in my short life and I am sure that I will go to the Seychelles someday as this area of the world was the most impressing to me so far !
Thanks again to Kidd who had to work about half a year now to get this shirt which is, even on the Seychelles, really hard to get. I really appreciate your help Kidd !
Eingestellt von DJLiesel um 03:38 1 Kommentar: 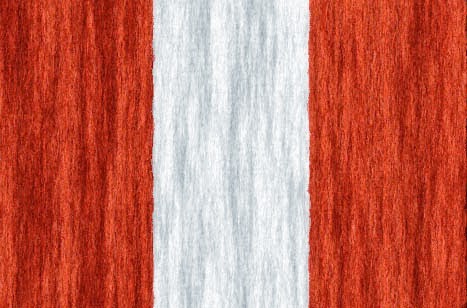 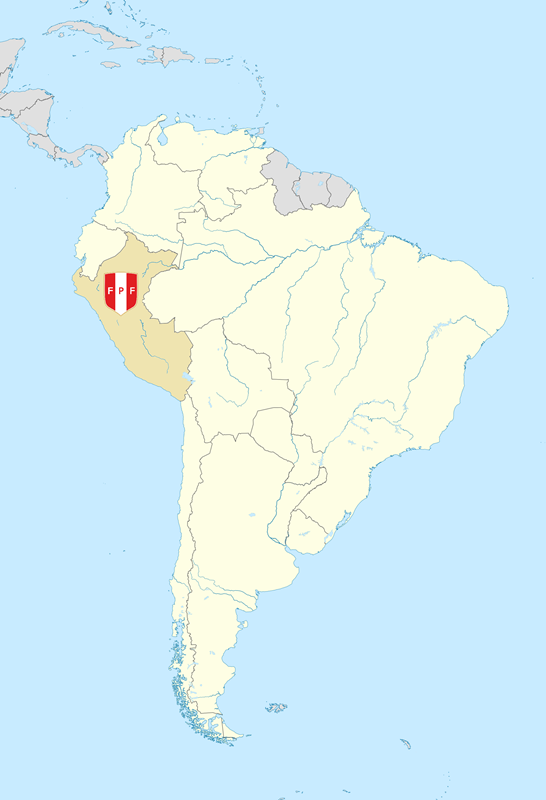 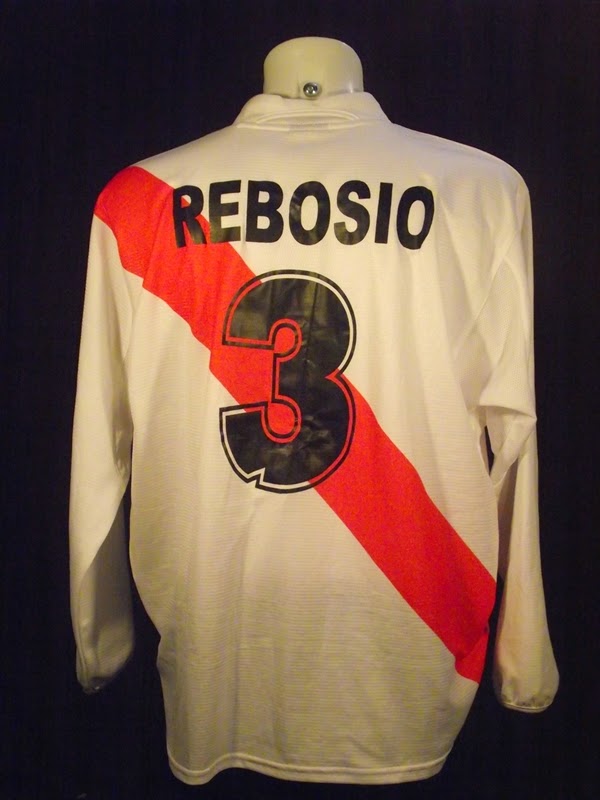 I got this lovely matchworn Peru shirt from my friend Cristian Castillo. He is a Peruvian who lives in the USA and he somehow hated my old Peru shirt. So he decided to send me this beauty Walon shirt as a gift. Thank you so much Cristian ! Quiero el camiseta mucho !
It was pretty hard to find a nice picture of Miguel Rebosio playing in a number 3 Peru shirt. If you search his name on google you find thousands of pictures like this instead:

I have no idea what kind of show he attended there, but it looks quite stupid :P
Eingestellt von DJLiesel um 08:04 Kommentare: