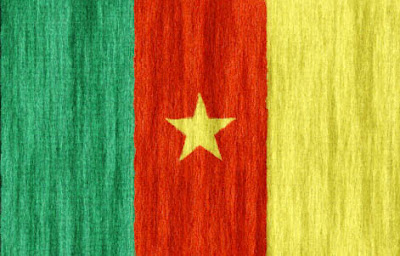 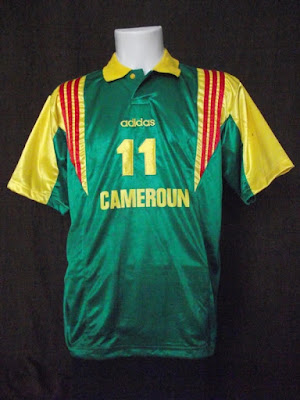 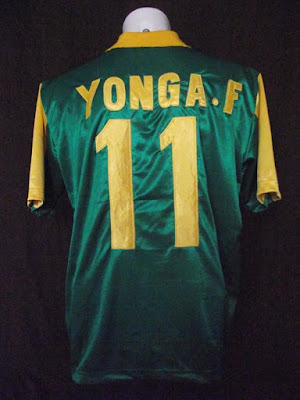 Cameroon is one of the classical powerhouses in Africa, at least since the times of their Golden Generation, which qualified for all World Cups between 1990 and 2002 and even made it to the Quarter Finals of the 1990 edition. One of the great figures of this period is surely the depicted Rigobert Song, who is still a hero in my home city of Cologne, where he played in older days.
One more connection I do have with this amazing vintage kit is that the African Cup in Burkina Faso 1998 was one of the first I followed completely. It was a nightmare for everyone as temperatures went up past the 40 degrees.
Finally, the design is just an amazing classical design with all those vintage materials we all love, including felt numbers.
Now, let us speak about the way I got the shirt and the player who wore it. The shirt was worn in one of the very few (depending on the sources he had 2 to 3 matches) games Francis Yanga was invited to participate in. All else I know about Mr Yanga is that he played in Düsseldorf for the local Fortuna in the second, third and even fourth division during their worst period in history. Well done!
My thanks go to a former scout of Fortuna Düsseldorf, who collected shirts himself and sold plenty of them - including a couple of matchworn national team shirts, which I nearly bought in complete.
Eingestellt von DJLiesel um 10:46