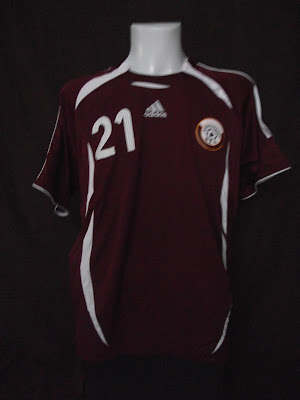 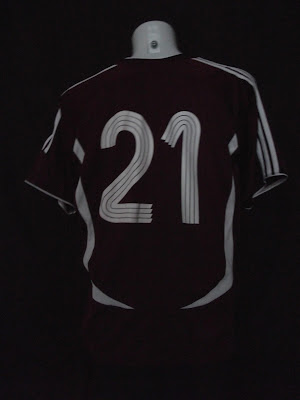 There is not a helluva lot I could write about Qatar or this particular shirt, to be fair. It is matchworn and it is the dull Adidas design, which was followed by the dull Burrda design (Qatar-made, see Qatar 1) and then followed by the dull Nike designs. A shame they dropped their homemade Burrda brand, when they started to design proper shirts, as the Belgium one they did.

The player, Hussein Yasser El-Mohammadi Abdulrahman on my picture does not only have a very handy name, he also can write Manchester United and Manchester City as former employees in his CV. Still, supporters of both clubs won't feel too much hate for him being transferred to the bitter rival, as he played a total of zero matches. For both combined that is.

Thanks to Andreas Beuler for this largely boring, but matchworn shirt, which was probably worn by some Under-X national team!
Eingestellt von DJLiesel um 09:59