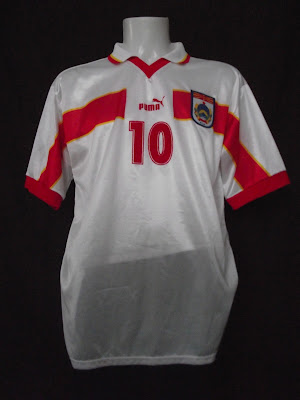 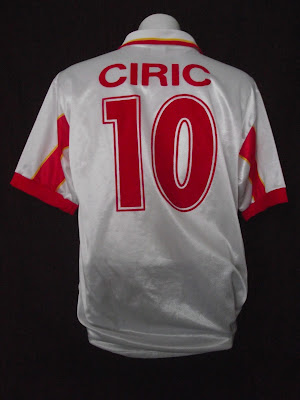 Yip, it was about time to get another Macedonia shirt, I though! This one is a matchworn one of Sasa Ciric, a Nürnberg and Macedonia legend, and could be purchased for only 30€ including shipment. I am quite sure that the seller was either Sasa himself or someone from the "Nürnberg" universe, as he sold about 20 Nürnberg shirts and this one, most matchworn by Sasa Ciric.

This very design was worn in the 2000 Euros qualifier campaign, when Macedonia was put in one group with Yugoslavia and Croatia. As I have personally been to the infamous water tower of Vukovar and to Macedonia and Kosovo, I will never understand how FIFA can take care to not draw Azerbaijan and Armenia together, but had no issues with 3 former Yugoslav countries in the same group only a few years after one of them broke apart from Yugoslavia by war (Croatia) and the other was struggled intensely due to 350,000 refugees coming from its North, fleeing another war of Yugoslavia (Macedonia). Crazy! Milosevic was still in power when the Macedonia traveled to Belgrade to meet its former parent country, as pictured above. Yugoslavia, still a powerhouse of European football at that time, won convincingly, but Sasa Ciric converted a penalty for Macedonia, at least.

All my thanks go to the anonymous seller on ebay, which might be Sasa himself.
Eingestellt von DJLiesel um 06:54