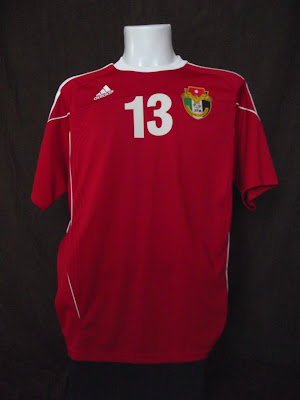 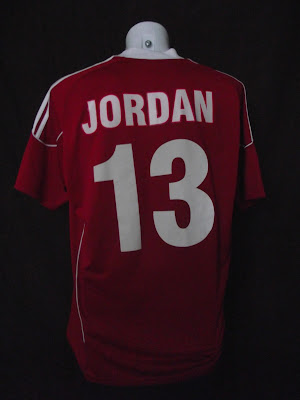 For this beauty of a shirt, all my thanks go to my Canadian mate Eric, who introduced to me Ahmad from Amman. And, of course, I own a lot of gratitude to Ahmad himself, who somehow convinced the JFA to sell this match issued 2011 shirt to him and ultimately to me!

While the shirt itself is, unfortunately, as dull as most Adidas strips are (did I ever said that no one is worse than Nike and Adidas in doing football shirts?), I like how the JFA tried to "pimp" it by applying "JORDAN" in huge letters with an odd red comic-style edging. It does not make Adidas' polyester-boredom an exactly fascinating or exciting shirt, but it prevents me from confusing it with the other 21049790312789503420 exactly identical shirts Adidas threw to clubs and national teams around the world.

Oh, I still love Jordan and its national teams, nonetheless (see Jordan shirt #1), but if the Jordan FA ever reads this: Go back to Jako, where you had one of the greatest and most elegant shirts in Asia, if not the world, and let my German country-mates of Adidas go bankrupt for their dullness!
Eingestellt von DJLiesel um 05:50