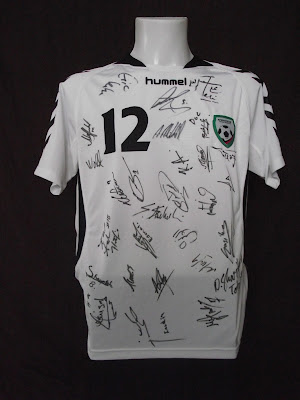 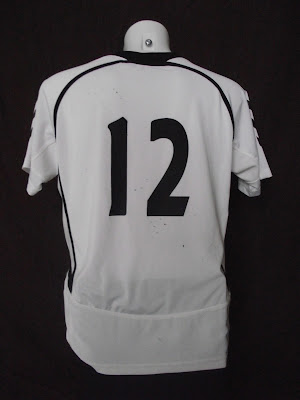 Finally, I got a matchworn Afghanistan shirt! Even better, it is signed by the whole squad!

I am unsuccessfully trying to get a matchworn Afghanistan shirts for ages, as I was never convinced that my earlier shirt was actually ever used by the squad. Given the fact that approximately half of the Afghan players fielded over the last 10 years are based in Germany, and speak perfect German, I was always convinced that it must be possible to get a shirt. In fact, I have spoken a lot to at least 5 Afghan national team players over the last years and was promised a shirt a couple of times. But, unfortunately, it never materialized, even when I drove all the way to Dreieich, where 4 national team players currently play, to pick it up.

But then I came across Eric Rasp, the former goalkeeper coach of the Afghanistan national team (and youth teams). Mr Rasp, a German, was extremely friendly and helpful! In fact, he sent me the only shirt he got from his time in Afghanistan, a shirt that was handed over to him by the squad as a souvenir of his time at the Hindukush! I am extremely grateful that Mr Rasp sent me this very special and precious gift and it has indeed a very special place in my collection. If you ever read that, thank you Mr Rasp!
Eingestellt von DJLiesel um 05:13