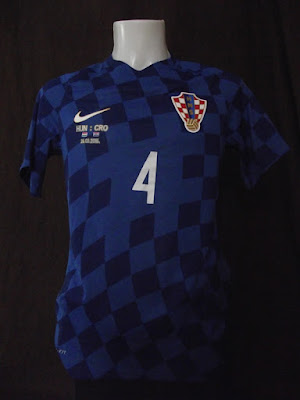 Finally a shirt with a quirky story again! I already had a "Croatia 2" shirt here and it was matchworn as well, by Josip Simunic. However I never was extremely happy as I seriously dislike Simunic for his aggressive and anti-football style of "play", mainly in the Bundesliga.
Funny enough a Croatian collector was absolutely after it. He has a collection of Simunic matchworn shirts and actually had a matchworn Simunic Croatia shirt in every single design he ever wore, except the one I had. So he was chasing for about 2 years until I finally sent him the shirt with the promise to get me a new Croatia matchworn as a replacement. It took another year or so, but finally he approached me with this beauty of a shirt. I really love that Croatia finally had some variation in their rather boring white-red chequered design.
The shirt was worn in a preparation match to the Euros 2016, where Croatia was one of the most disappointing teams to me, on the pitch as well as on the stands. It was worn in a 1:1 draw vs. Hungary, which was again one of the most positive surprises of the Euros to me.
The player who wore, Perisic, is like the total opposite to Simunic as well. He was one of the nicest guys in the Bundesliga for many years in Dortmund and Wolfsburg, before he moved on to Inter lately.
Eingestellt von DJLiesel um 13:38