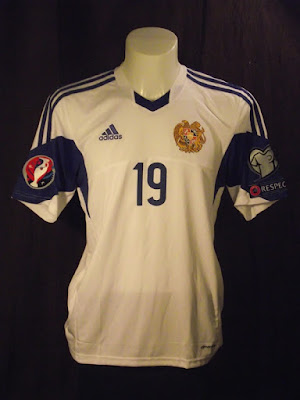 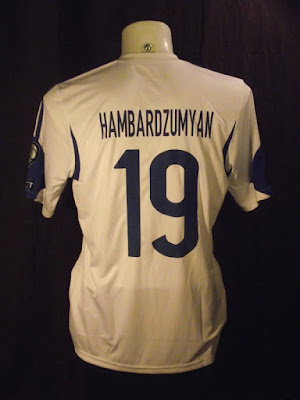 Another addition, which is amazing to me in multiple ways. Not only did I see the player who wore that shirt in an actual match already live on the pitch, but I also got it from a very generous and extremely friendly Armenian sports journalist I am in touch with for several years now.
Let's start with my meeting with Hovhannes Hambardzumyan, though. 2014 I did a roadtrip with my fiancé through the Souther Balkans, more precisely Macedonia -> Kosovo -> Montenegro -> Albania -> Macedonia. A trip I can only recommend to anyone, especially Skopje, Prizren, Kotor, the Tara Valley, Tirana and Lake Ohrid! Anyways, our first and last stop was Skopje, the capital of Macedonia (or FYROM if any Greek friends are reading this ;) ). At the end of our trip we met my friend Darko in Skopje, who helped me to get several matchworn Macedonia shirts before, and his wonderful wife. Darko is not only working in the finance sector and playing in the best death metal band of Macedonia, but he is also doing the live ticker for nearly all Macedonian First Division matches and is an ultra of FK Vardar, one of the Skopje clubs. So Darko took us to a match of FK Vardar in the amazing national stadium in Skopje on a sunny Saturday, just a day before our trip ended. One new signing, Hovhannes Hambardzumyan, was by far the most promising player on the field and really got my attention during the 90 mins. This, and his tongue-twisting name, made me remember him.
One and a half year later, in early 2016, I was again writing several mails back and forth with the Armenian sports journalist Gevorg Ghazaryan, who actually got in touch with me initially asking me about informations about the two CONIFA members Nagorno-Karabakh and Western Armenia. Gevorg planned to travel to Abkhazia to see the World Football Cup live and cover it for Armenian outlets. Unfortunately, because of the April attacks on Nagorno-Karabakh, he could not make it, but we stayed in touch for several weeks. After a while I just asked him if there is any way he could help to get a matchworn Armenia shirt. Well, a month or so later I had a parcel straight from Yerevan in my post box with this absolutely amazing shirt.
As I have been to Armenia in 2014 this shirt is so special in many ways to me that I really appreciate Gevorgs help a lot and want to take this opportunity to once again thank him!